2018 is ending and that is why the Lemonaid & ChariTea Foundation, once again, wants to say thank you, for all the donations given for our project partners through all those people on festivals. Doing a good deed; that’s the motto of the team, that stands on festivals throughout the whole summer. On nine different festivals, they have gathered nearly 3900 Euro through donations; besides selling the drinks.

Throughout the year and highly engaged, Frederik Wrede (a. k. a. Frede) and Lasse Reusch, who form ‘Team Event’, are on the road for the festival season. Among other things, they spread the word about the projects and the Lemonaid & ChariTea Foundation throughout the whole country.

From bench plank to festival wagon

A few years before, that meant: organising a van, gathering all needed things and let’s roll. Yearly. They plan: Where are we going, who has got time and when and what are we taking? Often, there’s only a few days in between festivals: ‘In my first year 2015, the phrase «Do you want to help a little» quickly became 16 weeks and 22 festivals.’, says Lasse.

Frede is part of the team since 2014. He also remembers some stacked boxes and a bench plank on top, a fridge and a white pavilion. Never missing: The Lemonade-Squeezing-Station.

Today everything looks a little more professional. Every year, from May until September, the team is driving all around Germany with one of the festival wagons.

The festival wagons are the team’s special gimmick: ‘Tim John and Martin Schmidt, two industrial designers, they had the idea. Two super-sympathetic guys and a total upcycling project. Both went looking for screws and wheels and whatever they could find in their drawers. And then we just put the whole thing together.’, Frede explains. 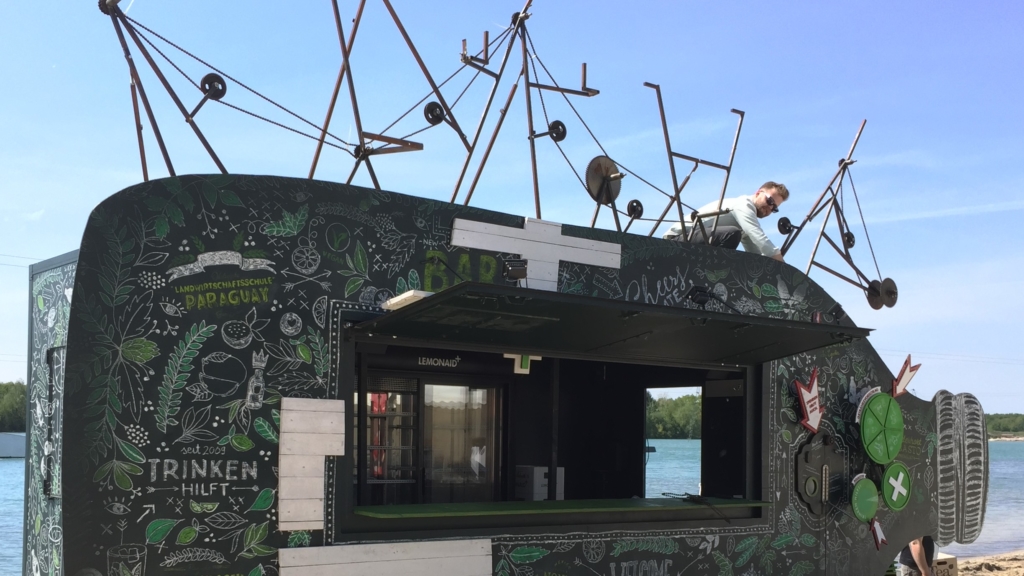 Constructing the roof of the festival wagon

‘Everyone can donate their bottle deposit and pull the pole of the built in one armed bandit. There’s a confetti canon, soap bubbles an on top of the roof, there’s limes. Everything is rotating and the people are totally into it; I always have a blast.’, Frede grins.

Especially, when people ask for the first time, what it is they are even donating for, and Frede and Lasse can point towards the names of the projects painted on the wagon, explain a little and give away the project brochure, it gets interesting: ‘Most of the people asking, are surprised, how much there is behind the foundation’s work.’, says Frede, ‘In the end, at the ‘Streetlife Festival’ in Munich, almost everyone just came to donate their bottle deposit.’ Precisely, games, Fun and doing a good deed goes hand in hand quite well.

Behind all this excitement, there, obviously, is a lot of work. Long days, and the weather can niggle one sometimes. Frede explains: ‘Almost every time, it was too hot. At the ‘Breminale’, we built up everything with 36°C in the shade; For two days.’
Lasse: ‘On top of the wagon is a metal plate. You work in shorts, wear gloves; it’s as hot as it can get. That’s why I wished for some rain every once in a while.’

But we were lucky sometimes, too. At the ‘Haldern Pop’, we had a spot at the Infield. You could see the main stage, straight ahead. If it rains, you have got a lot of time. That is not that bad, either, with that view we got. The only problem is, that I just don’t really like standing around, although, practically, I am in the middle of my shift. But that was a nice compromise, so to say.’

So, besides a big ‘Thank You’ to all the donors, the foundation also thanks the ‘Team Event’, every supporter and all hands. We can hardly wait for the next festival season with confetti canons and limes.