PEaCE 25th Anniversary & Universal Children’s Day Celebrations under the theme ‘THE WORLD WE WANT, Through the Eyes of the Child’

On 20th November 2016, ‘Protecting Environment and Children Everywhere’ (PEaCE) celebrated its 25th anniversary. On a day which also coincided with Universal Children’s Day, the event was hosted in Colombo, Sri Lanka, seeking to celebrate not only the progress of PEaCE over the past 25 years, but to recognize the voices of children and the people in the community to help protect and uphold the rights of children.

PEaCE was launched in 1991 as a campaign, with the aim of supporting the global initiative of ECPAT International. The organization’s main focus is preventative action with regards to Commercial Sexual Exploitation of Children. PEaCE focuses on 4 key sectors: Sexual Exploitation of Children in Travel and Tourism, Child Pornography, Child Prostitution and Sexual Exploitation of Children Online. It works in the most vulnerable geographical areas of Sri Lanka with local groups and activists, raising awareness, counselling mothers, monitoring the movements of child sex tourists, helping victims in court and assisting youth to engage in employment. PEaCE focuses to redress child abuse and facilitate the full development of children within our society, working with abuse victims and helping to rebuild the lives of vulnerable children through care, understanding and respect. Working as a legal monitoring and advocacy body, Peace also assists child victims through legal representation and providing vital information on the law and court procedures.

The Chief Guest for the event was the former Head of State Madam Chandrika Kumaratunga and the Guest of Honour was Dr. Sarath Amunugama, Minister of Special Assignments, representing His Excellency President Maithripala Sirisena. The event was also graced by the Executive Director, ECPAT International Mrs. Dorothy Rozga and Dr. Masako Matsuyama representing White Bird, Japan, a donor of PEaCE. It comprised three main segments; Handing over the Children’s Declaration, launching of a simplified law book and the presentation of the Outstanding Personality Award for a Child Right’s Activist.

Firstly, the representatives of the National Children’s Council presented the Children’s Declaration; a trilingual document representing the grievances, ideas and wants of the children of Sri Lanka. The Declaration is based on a recent nationwide campaign, PEaCE launched, which led to the event “THE WORLD WE WANT – Through the Eyes of the Child,” in collaboration with the Lemonaid & ChariTea Foundation from Germany and Terre des Hommes from the Netherlands. The campaign worked towards exploring the situation of children in Sri Lanka with regard to sexual exploitation online and in travel and tourism. 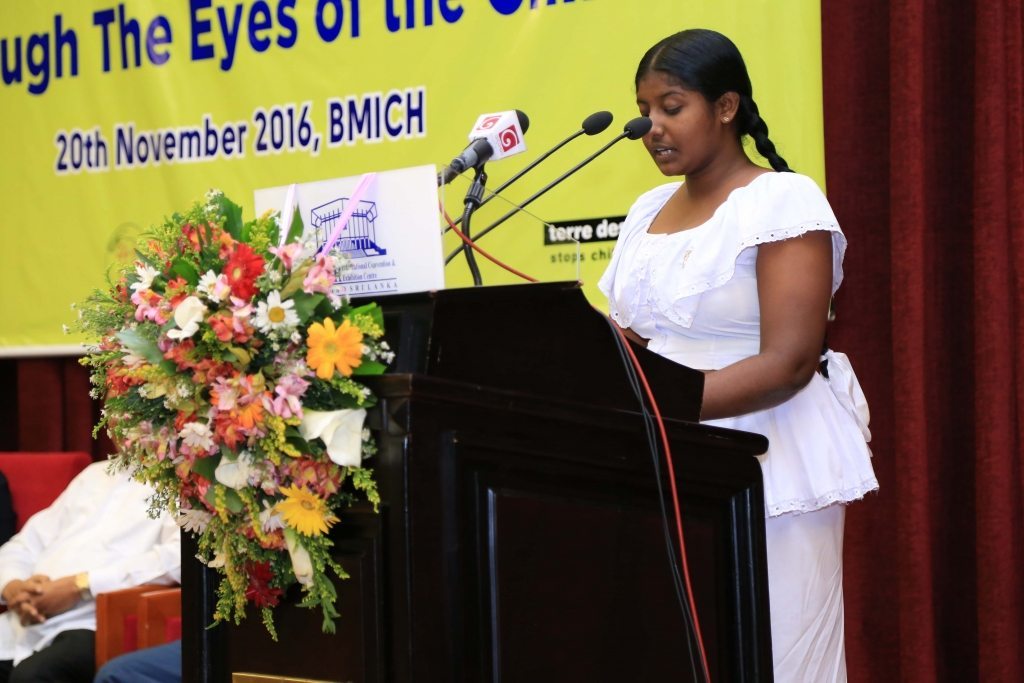 This campaign has brought in ideas from the grassroots level, having visited all nine provinces, consulting the members of 25 districts and conducting workshops, creating and raising awareness about the rights of children. The declaration was developed within two levels. Initially the district level children’s councils formulated the ideas and developed the first draft. This was discussed, edited and sharpened at the national level children’s council and the declaration was finalized with the hopes of sparking change across the nation. With the approval of The Department of Probation and Childcare Services, PEaCE was able to communicate with children’s councils at a district level and facilitated the development of this resolution titled ‘THE WORLD WE WANT’ including all the requests of how children would like to view this world. The declaration was handed over to the state leader’s representative and the former Head of State for action and practical implementation of a world children of Sri Lanka would like to experience. 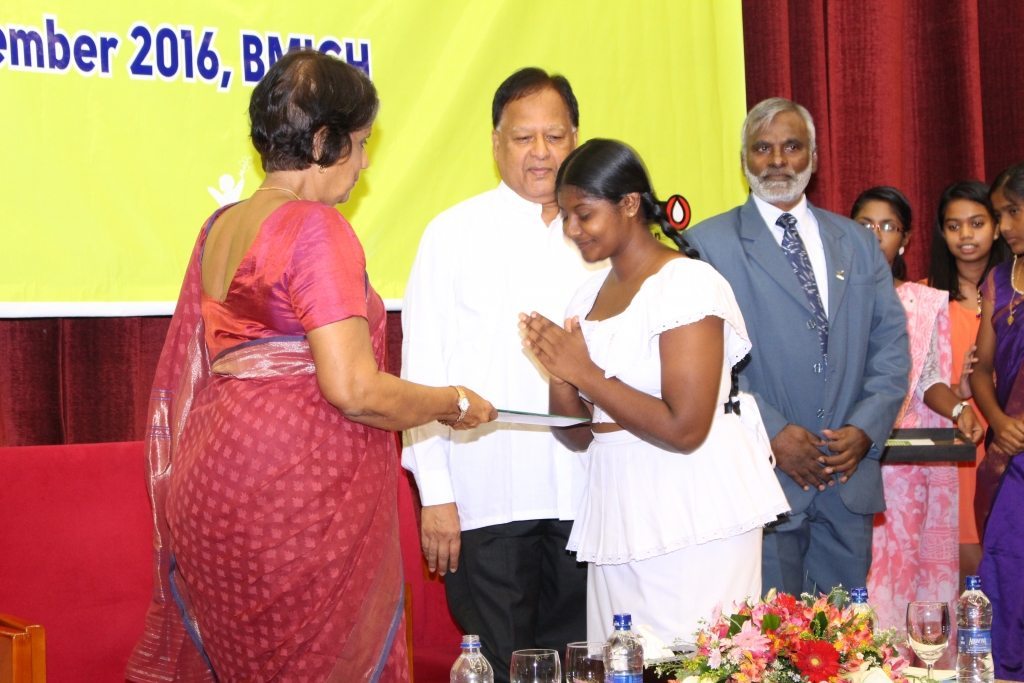 The declaration was handed over to the former president Madam Chandrika Kumaratunge.

Next, the organization compiled and launched a book that contains all the existing legislation in Sri Lanka pertaining to children to be used by law enforcement officials to conduct their duties in protecting children. As the laws governing children’s protection are extensive and law enforcement officials are at times in quandary on how to proceed in certain situations, PEaCE took the necessary steps to simplify child related legislatures for the reference of officers and other individuals working with children alike. Furthermore, the organization relaunched ‘Global Study on Sexual Exploitation of Children in Travel and Tourism’ which highlights the severity of the issues of commercial sexual exploitation of children in the travel and tourism industry.

Following this, was the main event for the evening; the presentation of the Outstanding Personality Award for Child Rights Activist, in honour of the unsung heroes who work tirelessly towards the protection of the children of Sri Lanka. The award is to honour and recognize an inspiring activist who has made an exceptional contribution to establishing the rights of the child in Sri Lanka with compassion, dedication and courage. Calls for nominations were advertised in newspapers in three languages and an independent selection committee decided on the winner. The winner of the Outstanding Personality Award for Child Rights Activist: Mrs. Gethsie Shanmugam. Gethsie Shanmugam’s contributions to improving the lives of children are remarkable, not only for her efforts over several careers over nearly six decades, but also for the vital and path-breaking nature of her work with some of the most vulnerable groups of children in Sri Lanka. Gethsie has continued to drive many vital initiatives for children, including establishment of an early safe house for child victims of the justice system, community and education-sector services for children and families following the tsunami in 2004 as well as conducting sensitive research on prevalence of child sexual abuse, rehabilitation of child soldiers and care of migrants’ children. She has continued to be actively involved, working in former conflict areas and the plantation sector, guiding and training others – and routinely being called on to deal with ‘difficult’ cases, both in the field and at home. Gethsie continues to contribute to state and private radio and television programs to provide advice to parents and caregivers on supporting children. 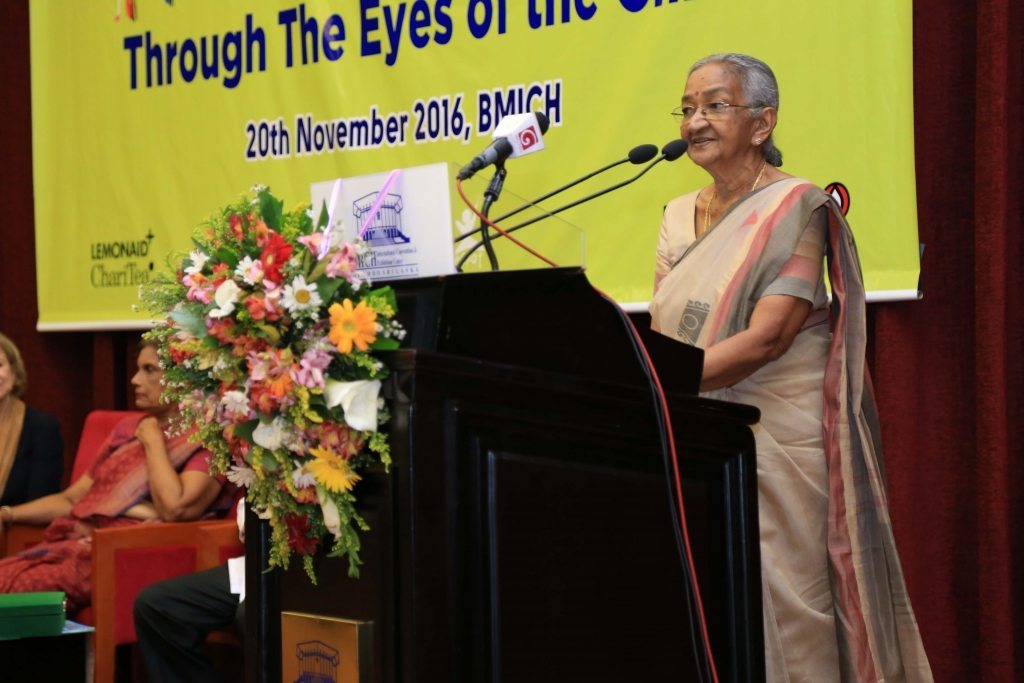