In 2017 the Lemonaid & ChariTea Foundation is supporting the orphanage Mahadeva Suwamigal in Sri Lanka with an one-time donation.

The beginning of the orphanage goes back to the establishment of a monastery in the year 1950. The Hindu order “Mhadeva Ashram” established a monastery in the inland of the north of Sri Lanka, in order to teach Hinduism. At first the monastery focused on teaching, in following during the civil war in 1983, two orphanages were built to give home to 117 boys and girls. The rural communities and NGOs supported the installation financially. As the civil war was expanding the children had to be distributed in the Mullaitb District and eventually ended in a “Welfare camp” in Chettikulam.  Towards the end of the war the children were brought back together again, after parts of the destroyed buildings have been rebuilt with the help of NGOs and the local governor Rasa, who leads the orphanage until today during his retirement.

Rasa: „…in our former abode with the sky as the roof, the walls and pillars bore marks of bullets and bombs…“ 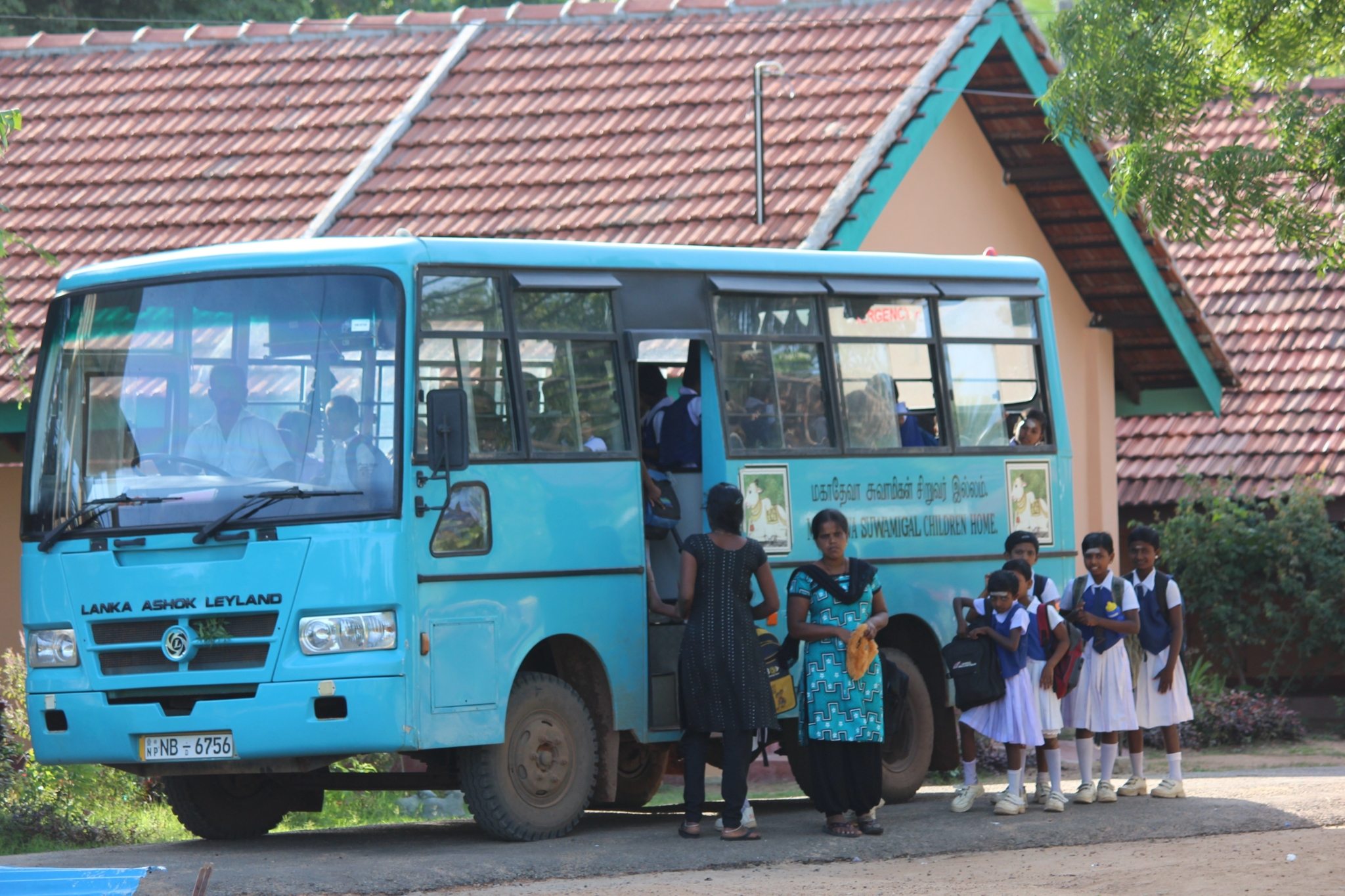 In order for the children to process the experienced horror of the war a lot has been invested in art and sports, especially in judo. During competitions several awards were given to children – an huge honor for residents of the orphanage. At the beginning 314 children were taken care of, today there are around 450 children and teenagers in the orphanage. Not all of them are complete orphans, sometimes the father is bemoaned, sometimes the loss of the mother. The rise of the number of the children is due to the great poverty – many of the locals are living under the poverty line.

We received the proposal for this project by the “Sri Lanka Hamburg e.V.”. The Sri Lanka Foundation has committed itself to the support of education, the intercultural exchange between the different population groups in Sri Lanka and the abatement of poverty. In this project the Foundation, with help of the Lemonaid & ChariTea Foundation supports the orphanage Mahadewa Suwagmi. The goal is that the orphanage will be able to live self-sustainable within the next five years. This food independence will be reached through the cultivation of  existing land. Next to the cultivation efforts, the project is supported in bearing the cost a training program for computer skills and sewing, in order to prepare the children for future professional and entrepreneurial activities. 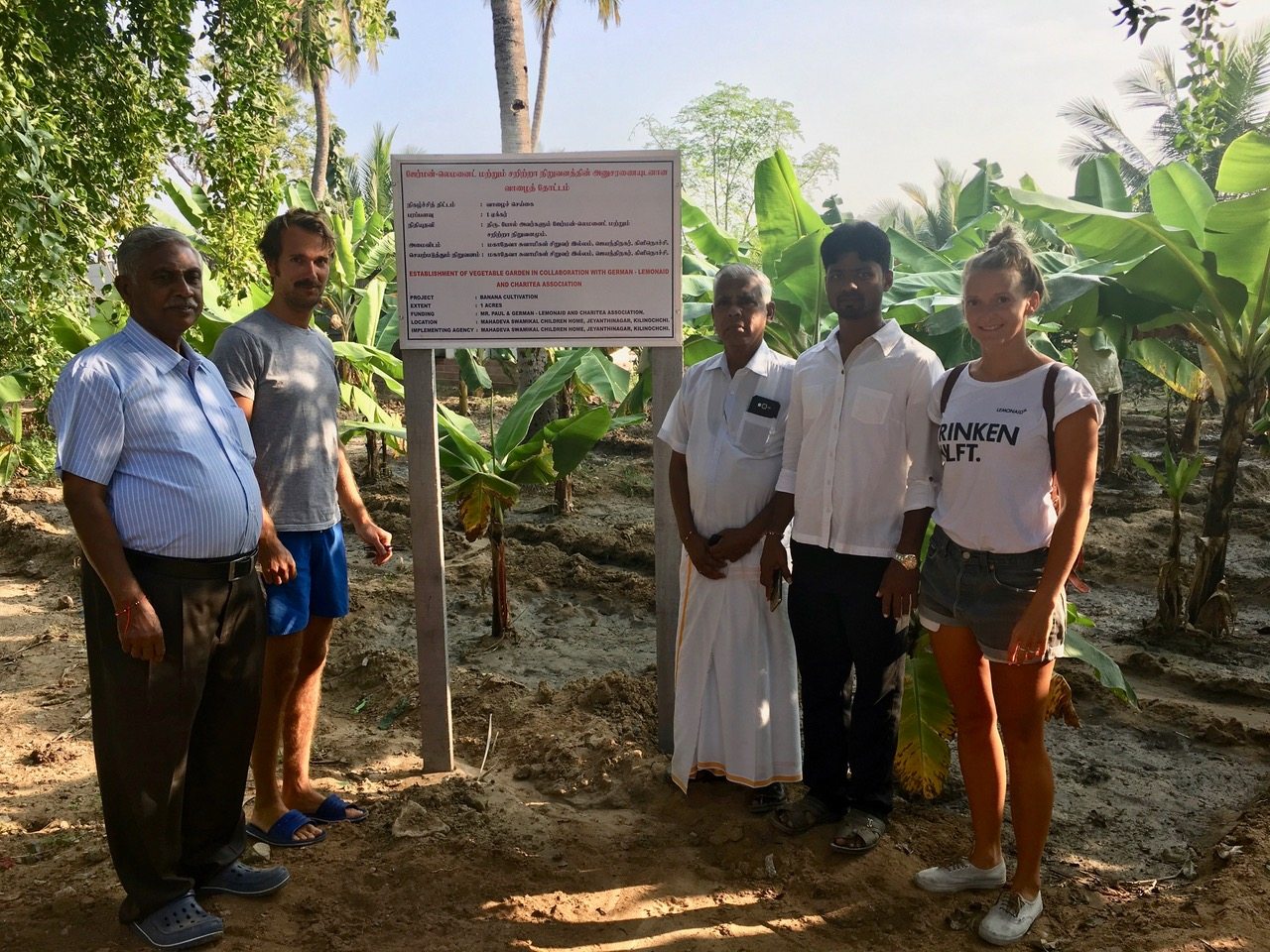 Jule Steffens and Paul Bethke at the orphanage in February 2017.

Jule Steffens and Paul Bethke from the Lemonaid Beverages Company visited the orphanage in February 2017 and brought us the following report:

“We travled to Kilinochi, in order to visit the Mahadeva Suwagami Childrens Home (also known as Mahadeva Ashtrama Saivach Chirwar Illam, Kurukulam and Gurukulam), which is funded by the Lemonaid & ChariTea Foundation. W stayed at a guesthouse, which is the residency from volunteers from all over the world – we had tasty curry there. The next morning we were welcomed and showed around by the local committee, which is composed of different capacities (members of the executive board, teachers, administrators) .

The orphanage has received a lot of land by fled Sri Lankans, but does not have the necessary means to cultivate it. Full of pride they showed us several fields, that finally could be cropped tanks to the donation of the Lemonaid & ChariTea Foundation: bananas, tomatoes, onions, coconuts, potatoes, pineapples, beans – a high variety of different types of fruits and vegetables. Even the rice is self-cultivated. Our donations could contribute to the goal to live self-sustainable and completely independent.

Most of the employees (approx. 60) come from the neighboring region, one of the teacher is from Colombo. We gazed at the generous and lovingly designed landscape. At the fields are huge signs are placed with the name of the donors, which was kind of uncomfortable for us but seems to be common in the area. We received flowers and were allowed to plant the first seed ceremnially on a new field together with the children. We were able to visit the accommodations, the computer room, the rice storage, the library and the dinning hall. During the food preparations – the diet is completely vegetarian due to the Hindu belief – the teams of the older children help the younger ones. The orphanage is really spacious, has different sites, as well as own bus, agriculture tools and vehicles. There are several playgrounds, temples, fields and own gardens.

The children sang for us and performed little plays – supervised by the proud teachers. Overall the relationship between teachers and children seemed respectful and close.”