Since May 2017  the Lemonaid & ChariTea Foundation supports the organization ‘Nceduluntu’ with two of its projects. Besides the ‘Beekeeping project’ the Foundation fosters the set-up of a vegetable seedling nursery in the community of Wesley. Thus, contributing to food security and sovereignty in the structurally disadvantaged region of the Eastern Cape in South Africa.

The policies pursued during Apartheid have burdened the region with persistent negative consequences. In Wesley poverty and unemployment rates exceed the average in the South East Province of South Africa. In the context of a poorly managed and under-resourced health system, a completely inadequate education system, geographical remoteness and lack of employment opportunities, the current prospects for the community members are desolate. State agencies are struggling to meet their development goals and basic service deliveries, such as the access to clean drinking water and sanitary facilities.

The relatively young non-profit organization Nceduluntu was founded by a South African philanthropist with the aim of tackling the social and economic problems in the region by supporting the development of the region through the promotion of community driven projects. It focuses on the empowerment of the local community through capacity building, skills development and poverty relief. In 2002 a program was initiated to reduce the high number of children with malnutrition where 523 children are provided with food on a daily basis. In view of the growing engagement the Nceduluntu community project was registered as a non-profit-organization in 2016.

Food prices are unaffordable for many households

Despite the availability of (communal) fields, free water and working force these resources are not used to grow vegetables. Most of the time, food has to be imported from other provinces and prices have been exacerbated by drought and inflation over the last years. Under these conditions many families cannot afford balanced and nutritious diets. Particularly for children this harbors serious health issues.

Concerned with food security in the region the organization looked for ways to improve the situation. They realized that while land was readily available, seeds and seedlings were often times not. The distance to the closest seedling nursery was too far-flung, making travel expenses prohibitively costly. Thus, they initiated the set-up of a nursery for vegetable seedlings on the Nceduluntu center’s land. Once in scale the vegetable seedlings are to bear the running expenses of the nursery. 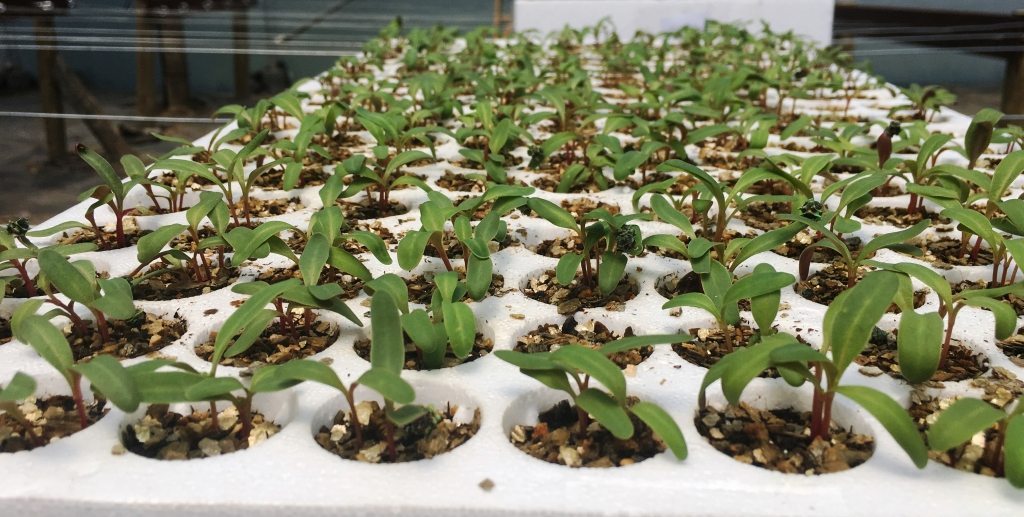 The first seedlings growing at the Nceduluntu Centre.

Since its kick-off in May the project made some major advancements. It succeeded in setting up a tunnel, an irrigation system as well as buying the necessary equipment. 10 motivated community members were recruited and participated in a permaculture workshop. For the Lemonaid & ChariTea Foundation an especially joyous event has been to hear about the exchange between our project partners. Nceduluntu visited the ‘Bulungula Incubator’ in the Eastern Cape. The two organizations seized the opportunity to exchange knowledge regarding the cultivation of vegetable seeds and seedlings.

“Three project members and myself travelled to Bulungula Incubator, having been introduced to each other by the Lemonaid & ChariTea Foundation. The visit was extremely helpful and made us rethink a lot of what we had been planning. Dave Martin [Founder of the Bulungula Incubator] gave us a lot of solid advice and gave us valuable contacts for procuring supplies, designing and setting up an irrigation system and managing the production process. We are very grateful for this contact and have kept in touch.”

This start-up phase is supported by the Lemonaid & ChariTea Foundation. Next to the infrastructure that is needed for the set-up of the seedling nursery, scholarships for the workshops are offered to the participants and the costs for the personnel are being covered.

In November 2017 the nursery successfully sold its first seedlings. Nceduluntu’s community projects make a valuable contribution to the food security in the structurally disadvantaged region. They boost the local economy, and create the desperately needed employment opportunities.